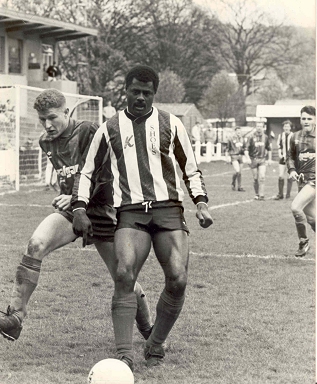 For the second season in a row Netherfield F.C. thwarted Burton's path to the Holy Grail, the Westmorland senior cup. For those who may have just got back from the moon, Netherfield were the premier semi-professional club in the Westmorland County F.A.'s area. As such they were required to enter their county cup, the same as the rest of the affiliated clubs in that organisation. In previous seasons they had always entered their reserve side, who play in the Westmorland league, a similar standard to our own. However since the arrival of Gary Peters, their manager as of Boxing Day 1989, they had played practically their full strength first team in this cup, which is not really in keeping with fair play and the traditions of the competition. Burton had the severe misfortune to come up against them two years running, in a period when we had our strongest team for many years. In any other time zone we would surely have won the damn thing on at least one of those occasions, had the opposition entered into the spirit and fielded their reserves. Midway through the following season Mr Peters left the club, by mutual consent I think the term used is, and they reverted to the aforementioned policy of fielding their reserves in this competition. So that's the background, what happened on the day then? Well "iffen tha'll joost shurroop fer a minit agh'll tell thi eh."

The game was played in April and it was a nice warm sunny day. Our generous sponsors, Lancaster Bros, aka Malgar, of Elmsfield Park Holme, had bought two brand new kits for us and neither had yet been used as we were saving them for the final. Gary Lancaster invited the whole club, not just the players, to a pre-match meal at Clawthorpe Hall Hotel, our base at the time. Our coach picked us up from there at 12.30pm; we even had a sign made for the window to make us look even more professional. All the players looked smart in white long-sleeved shirts, (except Dave Cross that is who insisted white wasn't his colour) and everyone had matching ties and dark trousers. Arriving at Parkside Road in plenty of time the players strolled on the pitch in the spring sunshine to "get a feel of the place". The team then retired to the changing rooms to get kitted out. Horror of horrors, some blitherin' idiot, me, had put in the wrong colour shorts. "It's the Wrong Trousers Wallace" As there were photographers there from that prestigious publication, The Westmorland Gazette, and these things matter to fashion-conscious young footballers, there was no option but to trail back to get the correct colour shorts. Mr Bernard Parsons, our club president of the time, drove the aforementioned idiot back to his house in Holme, breaking the land speed record for a Shogun on the way, to collect the right shorts. They arrived back with 5 minutes to go before kick off, and with all the players wearing boots, socks, shinnies and shirts waiting for shorts. Now if only the photographers had took a snap of that!

The match itself went pretty much to form, let's get real for a minute, we never really expected to have a chance of actually winning. The lads were disappointed not to have at least scored a goal though, as they had against the same opponents the previous year, but the best football team won on the day. Netherfield went ahead early on when Steve McCullough scored with a brilliant overhead kick after just two minutes. Burton then had their best 40 minutes of the match, creating many chances but not being able to convert one of them. Approaching half time we hoped to go in only one goal in arrears but conceded again, the scorer this time being Mal Jackson. Any lingering hopes we may have had were shattered in the first 60 seconds of the re-start. First Brian Fleming added a third and we then lost two of our best players, Andy Cochrane and John Lumb to a clash of heads, their own, soon after. Both needed more stitches than the Bayeux Tapestry and that was pretty much game over player one. Paul Wright scored the final goal of a four-nil game from a simple tap in. By way of consolation our own dear friend, and sadly now departed, Mark "mouse" Taylor was awarded man of the match, and he was exceptional that day in a losing team.

The picture accompanying this article is of Mark's brother Darren tussling for the ball with Mel Totoh of Netherfield. Mark can be seen running towards the pair of them. In the background are Derek White and Andrew Cochrane. It's the only photo that survives of that day. A team picture was taken, but in those pre-digital days only one was shot and it didn't come out. For the record, the strip was Barcelona colours, mauve and blue stripes, with royal blue shorts. The shorts we started out with when the kit box was opened were emerald green, ugh!